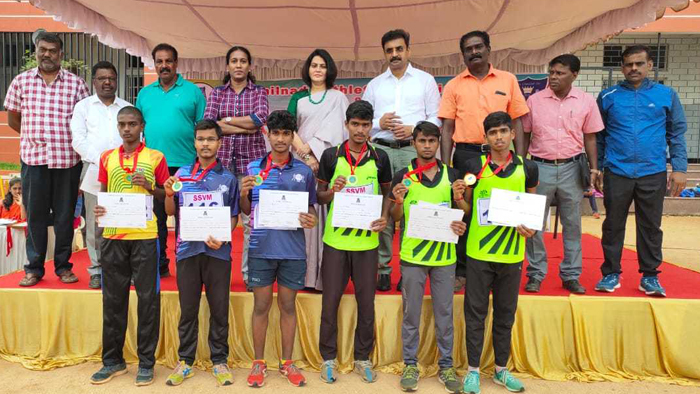 December 23, 2019 By sathish@sportingindia.com Comments are Off

Genesis Sports Academy got the team championship title in both U20 Men and Women Categories in SSVM Institutions ground held at Mettupalayam. In addition to it, they also became the runners up in the Men Category. It was a very good show put by the academy in the Cross Country race and they can hope to replicate the form at National Cross Country Championship.

Nilgris District Athletics Association and SSVM Institution should be credited for organizing this event very well with the cooperation of Tamil Nadu Athletics Association. All the athletes who finished in top 6 positions got a medal and cash prizes were given to top three athletes. All the Nilgris Athletes who won medals in NIDJAM 2019 were acknowledged at this event with cash prizes by TNAA.

The day began with Men’s and Women’s 10km race at the SSVM Ground, Mettupalyam. S. Victor Samuel of Genesis ran a brilliant race to emerge as the title winner. R. Ranjith Kumar of the Nilgris District gave a tough fight and got the Silver medal. Bronze Medal went to C. Manikandan of TamilNadu Police.

All the Athletes of Nilgris District gave their best on the track to clinch the Team Championship Title of Men’s 10 km Category by getting 18 points. Genesis did a good job to finish in the second position with 30 points. In the Cross Country Race, the team with the least points will win the title and at least four team members should cross the finish line to have a chance of winning the overall trophy.

K. Geetha of TamilNadu State Police ran a very good race to win the gold medal. V. Soniya of Chathrapathy Sivaji club- Coimbatore tracked gold medallist till the last 300m but was not able to match her in the final stage of race. She clinched the Silver medal for putting up a great fight on the track. K.Elavarasi of SDAT- Chennai ran well to get the bronze medal around her neck. Kovai Athletics Club got the team championship title in the Women’s Category.

Sathish Kumar of Genesis and Pasupathi of St Joseph’s Trichy fought tooth and nail in U20 Category but Sathish emerged as the winner. Pasupathi claimed the Silver Medal . D. Gokul of Genesis won the bronze medal. In this Category, Genesis won the overall trophy and St Josephs Trichy finished runners up with 20 and 37 points respectively.

A. Nithinsha of Sokaikeeda College of Arts and Science in Chennai ran the closet race of day along E Ramya of Sri VDS Jain Higher Secondary School, Thiruvannamalai. Nithinsha overtook Ramya at last 10 meters to get her first gold medal at this state-level meet and Ramya won the Silver Medal. Mithra of Ethiraj college got the bronze medal. Genesis got another overall trophy and Kovai Athletics club finished runners up with 43 and 49 points respectively.

All the top six athletes in each category will qualify for the National Cross country championship 2020. The performances of Athletes at this race indicate that they will be delivering their best ever performance for Tamil Nadu at the national stage.← St Joseph’s Sports Academy bagged the Overall Championship in State Junior Athletics Championship.34th Tamilnadu State Jr & Sr Open Championships 2021 →