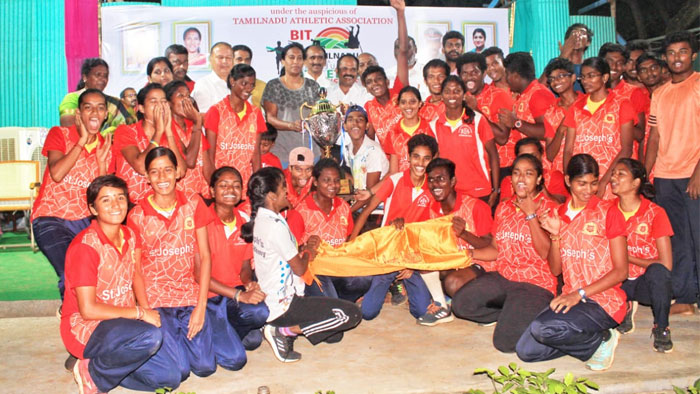 October 8, 2019 By sathish@sportingindia.com Comments are Off

Sherin of St Joseph’s Sports Academy leaped to a distance of 5.89m in U20 Women’s long Jump and missed the state record by. 10cm. R. Punitha of SDAT and N. Laura of Achievers Athletics Club were tied with a jump of 5.71m. Punitha won the Silver Medal on countback and Laura finished with a Bronze medal.

Raman of St Joseph’s Sports Academy and D. Gokul of Genesis Sports club pushed each other out of their comfort zone in a gruelling 300m boys U18 event. In the final lap Raman pipped Gokul to take the gold with 9:14.69. D. Gokul clocked 9:16.97 to win a well earned Silver Medal. Shejin of St. Joseph’s Sports Academy recorded 9:18.19 to win the bronze medal.

S.K.Surya of Tiruppur launched the javelin to a distance of 58.83m to bag the Gold Medal in U18 Boys Javelin Throw.  He was way ahead of his competitors in this event. Gladson Durai of St Joseph’s Sports Academy and  K Manikandan won the Silver and bronze medal with throws of 53.91m and 53.29m respectively.

Karunya of threw the Discus to a distance of 48.46m and smashed her own state record of 46.76m that she had recorded in last championship. She showed a very good consistency in U20 discus event throughout the competition held at Bannariammam Institute,  Erode. Priyadharshini gave a good fight to get Silver Medal with a throw of 42.02m. Vidya threw 34.59m to clinch the bronze medal.

In the last event of Day one, Walter Kandul of Indian Track Foundation ran a brilliant time of 5.56.99 to come very close to beat his own state record of 5:56.60. Akash of Tiruppur ran with him through out the race to win a Silver Medal with a time of 5:59.15. Ashok of Park Athletics Club got the Broze medal by clocking 6:00.28

All the athletes who finish in first three position in their events will qualify for the National Junior Athletics Championships. It is necessary for all of them to register in AFI and get their AFI UID to be able to send their entries for the National Competition.